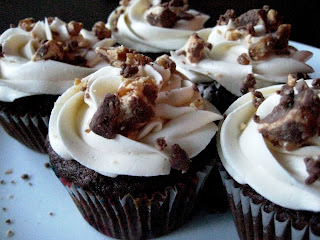 I think the photos and the title can speak for itself. These cupcakes are insanely delicious. But why are they a two-fer? Well I was making cupcakes for co-worker's birthday, and when I asked her what she wanted, she said red velvet. Since I made her red velvet last year and I've already blogged about them, I told her to pick something else so I could blog about it too - you know, so it could be a two-fer (I'm so selfless, I know : ) - but hey I'm a busy girl and I have to be efficient!). Then she said how about a Snicker's cupcake?

I was all set to come up with my own method of making these, when I saw this recipe pop up on Annie's blog last week! I knew Annie's recipe would be great so it took all the guesswork out of it for me.

I brought these cupcakes into work yesterday, and let me tell you - these were met with some RAVE reviews. One co-worker even told me they were probably the best cupcakes he's ever had. 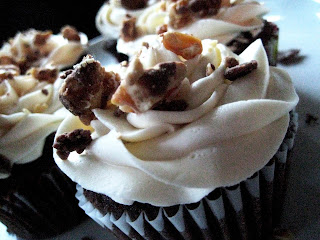 The caramel buttercream frosting on this is AMAZING. I can't wait to try this frosting on another cupcake and I'm already brainstorming ideas of different cupcakes to try this on.

I followed Annie's recipe to the tee, except I used a food processor to chop my snickers bars. I also skipped the caramel drizzle on top (for no other reason than I was just tired by the time these were coming together!).

Also, next time I make these I will probably use a different chocolate cake recipe. The cake recipe she has is great, however the step of dirtying up a sauce pan to melt the butter for the cake batter is probably not worth the effort for an already complex recipe. 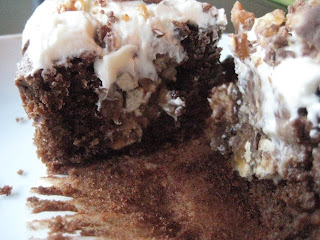 In a medium saucepan, combine the butter and the sugar over medium heat. Heat, stirring occasionally to combine, until the butter is melted. Remove the mixture from the heat and transfer to the bowl of an electric mixer fitted with a paddle attachment. Beat on medium-low speed, 4-5 minutes, until the mixture is cooled. Mix in the eggs and egg yolk, one at a time, scraping down the sides of the bowl as needed and beating well after each addition. Mix in the vanilla and then the cocoa mixture and beat until incorporated. With the mixer on low speed add in the dry ingredients in two batches, alternating with the sour cream, beating just until combined.

Divide the batter between the prepared cupcake liners, filling them about ¾ of the way full. Bake 18-20 minutes or until a toothpick inserted in the center comes out clean, rotating the pans halfway through baking. Allow the cupcakes to cool in the pan 5-10 minutes, then transfer to a wire rack to cool completely.

To make the caramel sauce, melt the butter in a heavy-bottomed saucepan over medium heat. Add the sugar and cook, stirring occasionally, until the sugar begins to foam a bit. It will look and smell like it’s on the verge of burning. Remove from the heat and add the heavy cream. Stir until the sauce is smooth (you may need to return it to the heat to smooth it out), then mix in the vanilla and salt. Let cool. (This can be stored in the refrigerator for up to 2 weeks.)

To fill the cupcakes, cut a cone out of the center of each cupcake with a paring knife.

To make the filling, combine the chopped Snickers bars in a bowl with 1/3-½ cup of the caramel sauce, and mix to coat.

Drop a spoonful of the filling mixture into each cupcake.

To make the frosting, add the butter to the bowl of an electric mixer. Beat on medium-high speed 1 minute until smooth. Blend in the confectioners’ sugar until smooth, 1-2 minutes. Mix in the vanilla, caramel sauce and salt until incorporated. (Note: the caramel sauce should be just warm enough that it is workable, but not warm enough to melt the butter in the frosting.) Add the heavy cream and whip on high speed until light and fluffy, about 3-4 minutes.

Transfer the frosting to a pastry bag fitted with a decorative tip. Drizzle the frosted cupcakes with additional caramel sauce and garnish with chopped Snickers bars.

melslatt
I'm a newlywed living and working in Chicago. I discovered a couple of years ago that the best way to unwind after a stressful day is chopping and drinking a glass of wine...now I love to cook! I get most of my new ideas from magazines, The Food Network or other blogs. My husband Joe loves 99% of what I make, especially if it's stuffed with cheese or wrapped in bacon. He does wish I baked more, but I think he's got it pretty good for now. 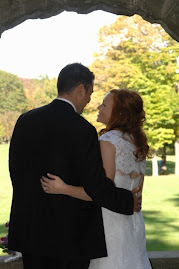